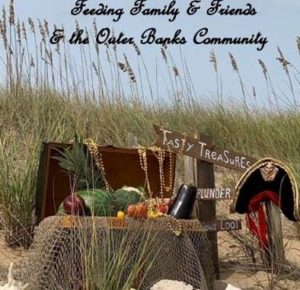 When the Women’s Association of Duck Woods Country Club (WADWCC) held their virtual board meeting on a warm June day, they discussed an ambitious fund-raiser that would have to be completed before the Christmas gift buying season. Publishing a cookbook of 201 recipes from 48 home cooks and professional chefs is a lofty goal in any year, but that same project under pandemic restrictions in five months is even more daunting.

Today, they have proven it can be done. On a cold December morning, WADWCC culminated their cookbook campaign around the club’s firepit donating over $4,400 to two local charities: Food for Thought and the Beach Food Pantry.

Bobbie Murray, president of Food for Thought, and board member, Margaret Lawler were on hand to receive the check in December.

Margaret Lawler, board member of Food for Thought said “We are committed to helping out even during Christmas break and this donation from WADWCC’s cookbook will go towards that effort,” Lawler said.

In five short months, the club received and reviewed hundreds of recipes. They cooked, taste-tested, edited, photographed, published, and then sold and distributed all 400 of the first print run of Tasty Treasures, Feeding Family & Friends & the Outer Banks Community. Inside are the best recipes from locals who know how to entertain and feed a crowd. Also included are recipes from favorite local restaurants such as Blue Water and Blue Moon Beach Grill, Saltbox Cafe, Steamers and the Duck Woods Country Club.

“We wanted recipes that were tried and true family favorites. We knew we had a lot of great cooks in the group. We also asked for the back stories to add  the personal touch,” says Carol Riggin, president of WADWCC. “We tailored the book around Outer Banks Living.”

To prove her point, there is a chapter title that every Outer Banks homeowner will immediately recognize, “Company’s Coming,” comically illustrated by a photo of a typical summer Saturday traffic jam exiting the Wright Memorial Bridge.

Riggin says that pre-pandemic monthly luncheon meetings for the 180-member club included raffles, donation baskets, and canned food drives and each year represented hundreds of dollars and bags of food for their favorite local charities.

“Without those meetings, we had to figure out how to keep our members together and still be safe and support our charities,” says Riggin.

Their initial goal was to raise $2,000 and split it between the two charities, but thanks to a cookbook sell-out and extra donations, $4,453 was raised.

Outer Bankers who know the difference between Dukes and Hellmann’s mayonnaise will be happy to recognize their own kitchen in this collection of recipes. Golf Balls, OBX Caviar, or Tidewater Shrimp are nods to the southern hospitality and golf course origins of the women’s group.

Dee Lewis, the cookbook committee chair says that family favorites like her breakfast casserole are what make this compilation a true treasure.

“I’ve been making that for several decades on Christmas mornings,” Lewis says.

Lewis had assembled two cookbooks for her own family members to use, but Tasty Treasures was a much larger task. The cookbook committee used Zoom meetings and email to collaborate while remaining socially distant. The cookbook was then published through Lulu.com, an online self-publishing company.

Lewis says, “They will continue taking online orders and our club is still going to donate the profits from future cookbook sales to Food for Thought and Beach Food Pantry.”

To get a copy for the same $15 price that was offered this fall, go to lulu.com and search on the title Tasty Treasures.